I was diagnosed in May 2007. My right eyelid started drooping, and I thought nothing of it. A few days later, the drooping was not going away so I decided to see my doctor, who immediately advised that I go to the nearest emergency room. The drooping of my right eye got to the point where I really started to look like a stroke patient. I remember the emergency staff staring at me, and I remember looking at myself in the mirror thinking “what in the world is happening?”. The doctors ran some tests that evening, one of which was a CT Scan of my chest, which they were initially hesitant about. I later overheard the conversation that I had a tumor in my chest. How terrifying for a 19 year old girl! That night, I received my diagnosis – Myasthenia Gravis. The doctors then sent me home with some medications, but I never knew that I would be taking them for the rest of my life. I received a phone call from a local neurologist a mere week afterwards, and I came in for further testing which re-confirmed the diagnosis. 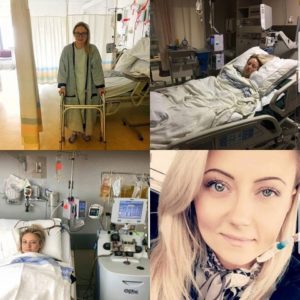 A month after my diagnosis, I started to drool when i ate food, and this was quite uncontrollable. I lived for months eating only soups and yogurts. I held a napkin under my bottom lip every time I consumed food. I started to look very thin and fragile. My swallowing was soon affected, and I found myself chopping my pills into my applesauce soon afterwards. I had numerous times where I would find myself struggling to speak after 20-30 seconds. I burst into tears multiple times as I could not hold a conversation for the life of me.

I got word in October 2007 that I was heading in for open chest surgery to remove a hyperplasic thymus (thymoma), and before I knew it, I was prepped for surgery. Recovering at home was harder than I expected, even with being a part-time student. After I recovered, I found myself starting to live a “near-normal life” again. Until one day, where I couldn’t smile. My best friend thought I was crying, because we were laughing so hard at something and she couldn’t see my smile. My facial muscles were suddenly paralyzed.

My symptoms started improving after months of treatment on immunosupressive therapy and my regular MG medication. I found myself in remission of the disease for the most part, until it became “generalized”. This is when it started to affect my walking, shoulders, grip strength, etc. My first ICU admission was in June of 2016. I was paralyzed from the neck down, with my breathing muscles only very mildly affected. I could not move my legs or my arms for days, including wiggling my toes. Nurses wiped the tears from my face as I was unable to communicate. This was a huge turning point for me in my condition. 2017 was my first plasmapheresis exchange. I received a central hickman line in my neck and lived with this for weeks while completing treatments. I received IVIG treatments at this time only every 6 months.

I found myself in and out of flare-ups right up until this present day. Since May of 2018, I started receiving IVIG treatments every 3 weeks. I was admitted to Neuro Observation in May of 2018, and a few weeks later ended up in ICU again. I received a PICC (Peripherally Inserted Central Catheter) line in my right arm which I kept for weeks; shortly later, I  received a port which was placed in my left arm. This was the first time in my life I applied for a wheelchair pass for my vehicle, and picked up my walker and wheelchair, in hopes I will never need to use.

I am very stubborn when it comes to “help”; I try to be independent  because I don’t want to be looked upon as someone that needs assistance (this is hard for those around me). My major support system is my mother and my fiancé. They will drop anything to be with me and to take me to the emergency unit when needed. I find that being funny and having  a positive mind with family and the nurses/doctors really makes a difference. I will crack jokes or thank them constantly, and I find this creates a bond, which makes them more caring. When I can’t speak, my family advocates on my behalf, sometimes this is hard as it took years for them to know “what to say” when I get sick. I have been depressed as a result of this condition before.  I also got my puppy the year I was in ICU; she is usually with me when I lay in bed (on bad days) and it makes a difference! The days when I am mildly symptomatic, I try to be more positive because things could always be worse.

It’s hard not to get down in the dumps when you don’t feel your best! I don’t have an answer, seeing as everyone is different, but I am thankful I have a roof over my head. This disease has taught me a lot of lessons in life. I try to live my life to the fullest, and to embrace every moment because as for myself and many others, it can change in an instant.

← PREVIOUS POST
My Most Difficult Time in Life
NEXT POST →
Can you still have sex even with Myasthenia Gravis?
on My MG Journey.